Travel Tales and Short Stories: Seeing Japan's 'other side'

Travelling in Japan?
Find the best deal, compare prices and read what other travelers have to say about hotels in Japan.

Check out our affliate sites

Published in 'The Japan Experience' series -

Many visitors in Japan generally shy away from the Japan Sea side of the country. And this is exactly one of its attractions. When travelling this different route one of the finest places to visit is Kanazawa in Ishikawa Prefecture – about two hours north-east of Kyoto by train (¥5,000). We were heading into Japan on our usual Chinese New Year snowboarding pilgrimage to Niigata and this time flew into Kansai airport in Osaka instead of Tokyo. Rather than catch the overnight train north to the Japan Alps we decided to stop in Kanazawa for the night and see the beautiful Kenrokuen Gardens in the morning before continuing on. After arranging for our bags and snowboards to be couriered on from the airport for us, it was good connections all the way through to Kanazawa on the efficient as always Japan Railways, although we were very lucky to get the last two seats on the Kyoto-Kanazawa leg.

We have both been this delightful city before more than once, but never in winter, so we didn’t want to pass up the opportunity. After arrival and a quick meal we headed left out of the train station (note: this was to prove a crucial point) to find a hotel for the night. After we had wandered for sometime we found ourselves in the delightful old Nagamachi samurai district. Being quite late in the evening by now the district was virtually deserted. As we ambled along there was a light snowfall which leant itself to one of those wonderful, slightly surreal, episodes of life when one feels they are enjoying a unique experience, that is almost disconnected from reality. Maybe the feeling you experience is somewhat like being in your own movie is probably the best way that I could describe.

However as we emerged from there into the nightlife area we began to find that all of the hotels were full. It was now past 11pm and in desperation we even inquired at the desk of one hotel that would have charged your first born child - but even they were full. At the public phone in the foyer we began to hear the same from all hotels – “Sorry, we’re full” (except it was in Japanese).

I located a ‘Townpage’ (English phone directory) nearby and circled around a couple of hopeful looking entries. Lo and behold the Kanazawa Business Hotel had a room - but we had to hurry because they wanted to go to bed. Ironically the hotel was less than five minutes walk from the station. If only we’d turned RIGHT. The proprietors were a lovely old couple who treated us like long lost grandchildren. The establishment itself looked like it had not changed one bit since the 1960’s. It did not matter as we at least had somewhere clean and comfortable to sleep, plus the bonus of a steaming hot furo. 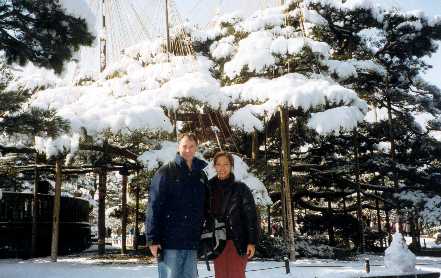 In the morning the Kenrokuen Gardens and nearby castle were abuzz with tourists. A pity but it was still worth the stopover. Kenrokuen, opened in 1871, is rated as one of the three best gardens in Japan, but THE best in my humble opinion. We took almost two rolls of film and were only stopped from starting on a third by a faulty camera. We also had a brief tour of the nearby remains of Kanazawa Castle – some is a reproduction but worth the effort nonetheless. Not too far away is Teramachi, the temple district or the old Higashi geisha district.

Most of the sights in Kanazawa can be seen in around a day of ambling and using the very good public transport system. However further exploration outside of Kanazawa, particularly to the rustic and beautiful Noto Peninsula, is highly recommended. If you wish to stay a little longer in Kanazawa (which we would highly recommend) head for the International Culture Exchange Centre, which can arrange homestays, offer Japanese language courses or provide books from their English library.

Overnights rates for basic business hotels in Kanazawa generally start around ¥3,500 per person per night and pre-booking is obviously recommended. Admission to the gardens is a very reasonable ¥1,000

This article is part of a series relating to our lives abroad. For more articles click here.

May be reproduced for personal use only. Any reproduction in print or in any fixed or for-profit medium is not allowed without written permission. If any of these pages are copied, downloaded or printed the copyright statement must remain attached.

Any use of this or other works for academic and/or other research must be duly acknowledged by bibliography or reference.